MegaResearch agency specializes in comprehensive marketing research in various sectors of the economy.

«Infamed K» is a high-tech pharmaceutical factory. «Infamed K» is the city-forming enterprise of Bagrationovsk, Kaliningradsk region. The first drugs launched in 2014 were domestic antiseptics «Miramistin» and «Okomistin». The plant's activities are also aimed at implementing projects that promote import substitution and export of medical products.

One of the most vulnerable segments of the medical device market is the production of urological catheters. The share of imports here exceeds 90%, and domestic companies produce obsolete products that are practically not in demand. In order to receive investment for the organization of production of «Foley» catheters, «Infamed K» needed to conduct a marketing study of this market, which it ordered from the MegaResearch agency.

MegaResearch specialists analyzed the possibility of import substitution of urological catheters, 90% of which are supplied from abroad. As a result of the study, the hypothesis about the demand for domestic products was confirmed. To justify the investment of the project, an in-depth analysis of all imports for 4 years was carried out, and the market potential was evaluated. Analysts also found that a significant part of the product is consumed under the state order.

A project has been launched to build the first production of urological catheters in Russia. The total amount of funds allocated for the launch of the first stage was 1 billion rubles. The data of the conducted research became the basis for making a positive decision to open funding. Two South Korean companies were co-investors. 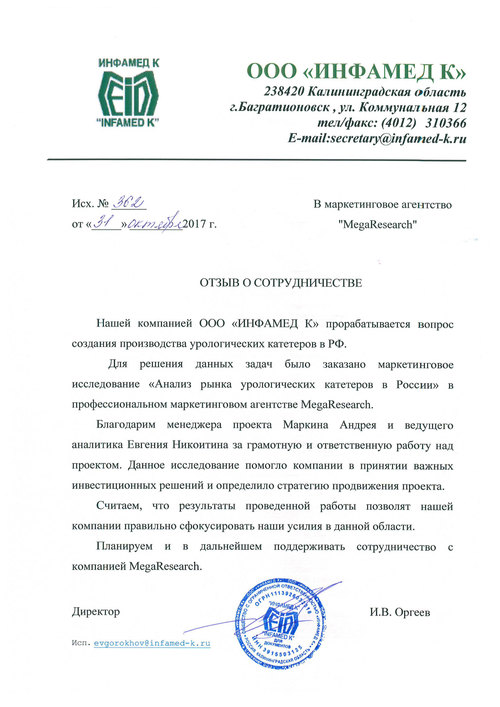