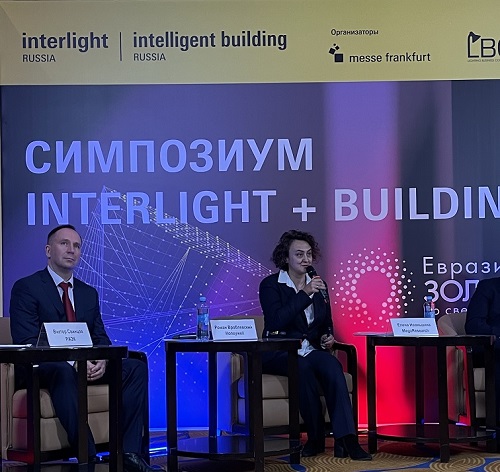 On November 26, 2020, within the framework of the section devoted to the prospects of development of the markets of electrical engineering, automation systems and building safety during the crisis, the head of the analytical group of our agency Elena Ivanshina made a report "Trends in the development of Smart Home systems and the needs of the target audience in the Moscow market".

The market of Smart Home systems in Russia is just beginning to form and, according to analysts, lags behind the world by about 5 years. Of course, the main trends of its development will repeat the global ones, but it is impossible to fully transfer the European or American experience to Russian consumers. The reason is in the peculiarities of the mentality: if abroad smart apartments and houses are chosen mainly for security reasons and saving resources, then the Russians in the first place are prestige, comfort and the ability to quickly monitor the condition of their loved ones staying at home.

At the same time, in the conditions of the economic crisis, the solvency of the population decreases, and the cost of equipment, which includes a lot of imported components, increases. Elena spoke about the results of a survey of consumers living in apartment buildings in Moscow, during which it was possible to identify the most popular smart home services today and the acceptable level of monthly costs for their payment for the target audience.

In addition, the report analyzes in detail the volume and structure of the market, drivers and constraints of its growth, key players and their shares, the main product segments in terms of their representation in the market and the degree of priority for consumers. The data voiced by Elena was obtained as a result of a study conducted by our agency in august-september, so they are useful and relevant at the moment. The participants of the symposium took them with great interest.

MegaResearch marketing agency specializes in studying complex and technologically intensive markets, including those where there is very little information in the public domain. We invite all those who need professional analytical support to make informed management decisions on business development to cooperate. 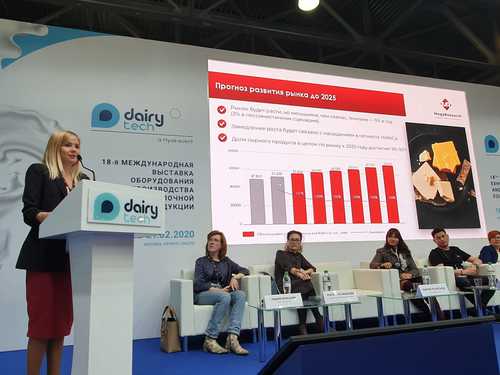 On February 20, 2020, at a discussion held within the framework of the International Conference Ingredients Russia, Maria Leontieva, head of the analytics department of the MegaResearch marketing agency, made a report on the analysis of the Russian market of pizza cheese in the HoReCa segment.

In the period 2016-2019, the market for pizza cheese grew rapidly, its volume increased by 14% annually. This is not surprising: cheese is the main ingredient of pizza filling, the consumption of which is constantly growing. In the first part of the report, Maria spoke about the structure of this market and gave some interesting facts:

Almost 90% of HoReCa's businesses purchase pizza cheese from distributors. Only the largest pizzerias or local companies that have established cooperation with local factories work directly with manufacturers.

These data were obtained by our agency's analysts during a survey of 300 companies in the range of which pizza is positioned as one of the main products. In conclusion, Maria Leontieva shared the forecast of market development, which was compiled based on the results of expert interviews and analysis of the main trends in the consumption of cheese for pizza. Experts assume that the market growth will continue, although at a lower rate. The slowdown in growth in the medium term will be mainly due to the saturation of the HoReCa segment. 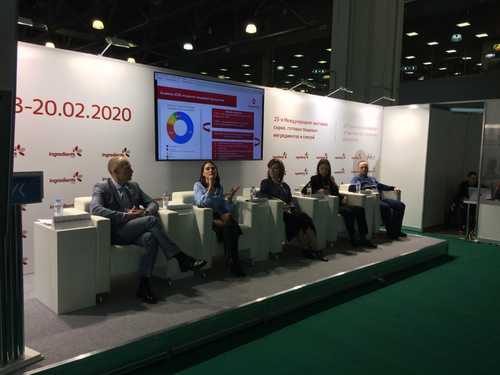 Some experts consider the trend for a healthy lifestyle to be a fashion that is formed under the influence of various "horror stories" about the dangers of food additives and substitutes for natural products. There is also a diametrically opposite view: the number of people who really think about what they eat is growing, and they have more and more influence on the structure of food consumption.

What is really going on in the food supplement market? Our PR Director Elizaveta Sharipova told about this at the discussion "Nutrition and a healthy lifestyle: the main directions of development and formation of a culture of consumption", held within the framework of the 24th International Exhibition Ingredients Russia on February 18, 2020. She made a presentation in which the following topics were discussed in detail:

The main conclusion of the report is that the market of food additives is developing under the influence of several multidirectional trends and the desire of a certain part of the population for a healthy lifestyle is one of them. Its influence will grow, because the number of supporters of healthy lifestyle is constantly increasing. This means that the share of natural and functional ingredients in food products of all categories, including the economy segment, will grow.

Do healthy foods have to be expensive? Can sausage be good for health? In the light of the presented report, these issues aroused particular interest, so a lively discussion ensued among the participants of the conference. The opinion that absolutely harmful, as well as absolutely useful products do not happen — everything is individual, the main thing is that the diet is balanced.

It is likely that the demand for high-quality balanced nutrition will determine the development of the food ingredients market in Russia in the near future. MegaResearch analysts predict the greatest growth in demand for natural food dyes, modified starches and especially vegetable bases, which in Europe have already passed into the category of mass products.

Our agency closely monitors current trends in the food market and regularly performs market research for its leaders. Contact us for professional analytics on any segments of the Russian food industry and other complex B2B markets. 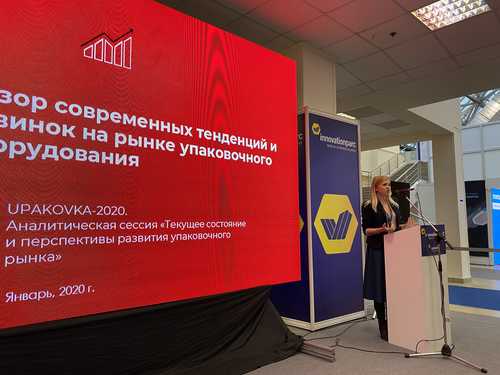 The analytical session "Current state and development prospects of the packaging market" was held on January 31 at the Upakovka-2020 exhibition. Maria Leontieva, head of the Analytics Department of our company, spoke about current trends in packaging and gave a forecast for the packaging equipment sales sector.

The first thing you need to pay attention to is what trends in the packaging itself affect the equipment market. Weight reduction and the desire to reduce the cost of packaging, the growing demand for "smart" packaging, the popularity of borderless packaging, as well as the fashion for a healthy lifestyle and environmental friendliness – these are the key trends today. Engineers and equipment manufacturers must take this into account, and today leading companies, both foreign and Russian, are already implementing these requirements in their latest models.

The result was the production of equipment with a high degree of automation, which allows you to quickly change the format and adapt to a new type of packaging. Compliance with food safety standards, the trend to increase the shelf life of products, the possibility of remote maintenance and the gradual introduction of “Industry 4.0” standards - this also needs to be taken into account by technology developers.

According to MegaResearch analysts, in the near term until 2025, the market of packaging equipment in Russia will grow by an average of 3.5% per year, the growth drivers will be the product segment, followed by pharmaceuticals and cosmetics.

It is worth adding a few words about the secondary market of equipment. Maria Leontieva believes that this segment will still retain its attractiveness, as there are no grounds for the growth of real incomes of our citizens. And these indicators, as you know, are interrelated. 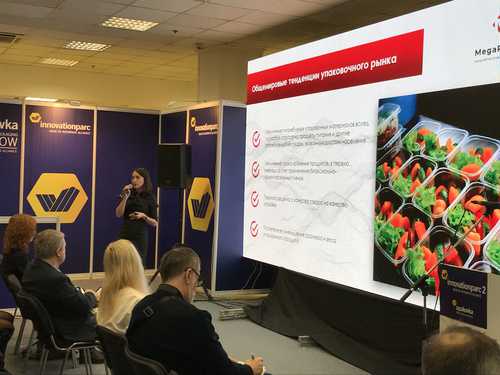 MegaResearch report on "What has changed in the rigid plastic packaging market over the past 30 years?"

Within the framework of the international specialized exhibition Upakovka-2020, which was held from 28 to 31 January 2020, an analytical session "Current state and prospects for the development of the packaging market" was held at Expocentre Fairgrounds on 31 January, organized by our agency.

During the session, our PR Director Elizaveta Sharipova made a presentation on the topic "The market of rigid single-use plastic packaging in Asia and Eastern Europe: major changes over 30 years". Our agency's analysts have conducted relevant research. Elizaveta Sharipova began the report with global trends in the packaging market, including increased consumption of packaging materials following the growth in demand for food products caused by population growth; increased shelf life of products, primarily due to the use of BOPP films; shifting the focus from product quality to packaging quality; gradually reducing the size and weight of the packaged product.

Overall, the total consumption of rigid single-use plastic packaging in Asia is 7.5 times that of Eastern Europe. At the same time, the largest volume of consumption is observed in China, and in Japan, negative dynamics is recorded. Next, Elizaveta Sharipova reviewed selected countries in Asia (Japan, China, India) and Eastern Europe (Poland, Czech Republic, Lithuania, Latvia, Estonia). In general, the share of modern materials (PET, A-PET, BOPET and PET-G) has increased in all countries under review. Everywhere, the share of polystyrene consumption decreased while maintaining the consumption of polypropylene. In addition, in all the countries under consideration, except China, the share of polyethylene use has decreased. The global market for rigid polymer packaging will grow by 3-3.5% in the coming years. The largest increase will be observed in China and India. In developed countries, consumption growth will decline, and after 2025 it will become negative. 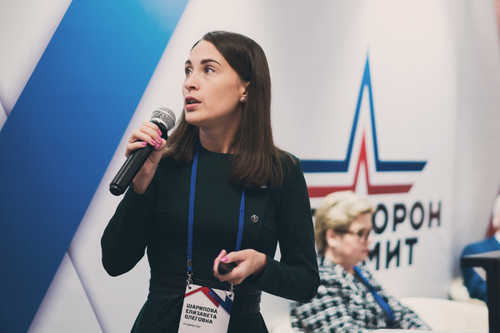 Analysis of the dynamics of industrial production shows that the period of active growth of the defense industry is ending. If in 2008-2017 it more than doubled its volumes, in 2018 for the first time in the last two decades, the level of state support decreased, and the output of military products decreased by 2.5%.

On November 28, 2019, the Russian Defense Industry Summit was held in Moscow, dedicated to finding solutions to diversify the Russian defense industry enterprises by entering the markets of civilian products. Our PR Director Elizaveta Sharipova spoke at this forum and told about what prerequisites exist now for the creation of conversion industries, how to choose promising areas of diversification and how our agency can help defense enterprises overcome the problems that may occur along the way.

Analysis of the dynamics of industrial production shows that the period of active growth of the defense industry is ending. If in 2008-2017 it more than doubled its volumes, in 2018, for the first time in the last two decades, the level of state support decreased and the output of military products decreased by 2.5%. The reason for such changes is that the rearmament of the Russian army is almost over, so its funding is being reduced.

Despite the fact that Russian President Vladimir Putin has set the Security Council the task of further increasing the share of modern weapons, the main mechanism for its solution will be to increase the efficiency of spending allocated budget funds, and not just increase their size. Thus, the priorities of the state order are changing and the defense industry enterprises need to adapt to the new conditions of existence.

Given that the defense industry is not only aircraft and ships, but also several million people working in this area, the heads of defense plants are already forced to look for new customers in order to load their production capacities. To do this, you need to solve several tasks at once

MegaResearch agency has been researching various industrial and household markets since 2012 and has been offering a ready — made marketing product for more than 5 years-a selection of promising directions for the company's development. Our analysts will analyze the existing assets and competencies of the enterprise, offer several options for opening a new production, conduct a consumer and competitive analysis of each possible segment, assess its capacity and prospects from the point of view of import substitution, calculate the potential profitability and payback period of investments.

Over the years, we have already helped many military organizations to master the parallel production of civilian products. Among them are the structures of the state corporations "Rostec", "Rosatom", "Rusnano", enterprises of small aircraft, special engineering and a number of others. We offer all interested specialists professional analytical support to enter new markets.