MegaResearch agency specializes in comprehensive marketing research in various sectors of the economy.

RM-Steel is the largest Russian manufacturer of special hot-rolled shaped products for the shipbuilding and mechanical engineering industries.RM-Steel was founded in 2005 and since then has been constantly developing new foreign markets. The semi-bulbous profile produced by this company is certified by the world's leading classification communities, including the Lloyd's Register. RM-Steel LLC supplies its products to all Russian shipyards that are part of the United shipbuilding Corporation, as well as to many major foreign consumers.

In 2016, deliveries of profile rolled products to Kazakhstan were established, and in 2017, preparations for trade expansion to the East began. In this regard, it was planned to build a metalworking plant in the far eastern federal district. Marketing research of the market of hot–rolled shaped rolled products with justification of prospects of export deliveries to the countries of Asia was ordered by RM-Steel LLC in our agency.

MegaResearch experts in the field of metallurgy and mechanical engineering conducted a large-scale study in eight leading countries in steel consumption. The ship profile rolled products market was studied in the far Eastern Federal district of Russia and nearby China, Japan, South Korea, Malaysia, India, the Philippines, Indonesia and Singapore. We analyzed market players and the competitive environment. As a result, recommendations were developed on the range of steel grades for certain industries in each country. 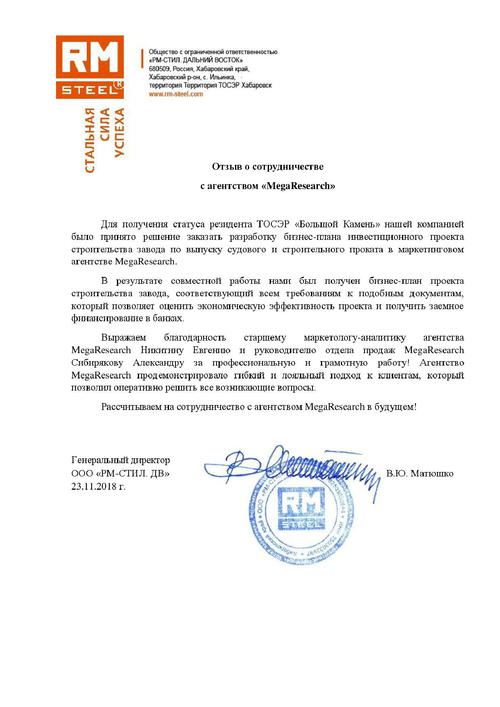